Included here if for no other reason than its association with John McFadden who is seemingly the earliest known source for the tune.
To speculate on its earlier origin, there existed an old now deserted village of Seascainn2, part of the larger townland of Gabhlán near Doocastle in East Mayo where apparently Michael Coleman travelled to a ‘spraoi’ at ‘Scanlon’s house’3.
In connection with the placename, Pat ‘Darkie’ Finn from Seascainn is mentioned in the song McAlpine’s Fusiliers written by Martin Henry (of the Henrys of Cloonlarin, Doocastle) and from which, the title and many lines were later taken and worked around by Dominic Behan into a version subsequently to be made famous by The Dubliners.4
Pakie Hunt (b.1900 [n.b. Patsy Seán Nancy?]) from Cloonfeightrin, Doocastle recalled the night Coleman first heard The Shaskeen reel played by Paddy Sweeney from Moylough:

“Christ,” says Coleman, “I never heard it in my life.” And didn’t he keep at Sweeney to keep playing it all night. And Coleman had every bit of it going home.”5

Amongst the first ever recordings of the tune (and indeed of Irish traditional music) were those of Patsy Touhey (at least two) made by O’Neill and Sgt. Early in the early years of C20, one of which was to provoke the most tormentedly fanatical praise to be lavished, possibly on anything ever (as evinced by Henebry’s words in the first excerpt from O’Neill below). Michael Coleman recorded it initially during what appears to have been his second ever recording session on April 1st 1921, and again 15 years later on October 3rd 1936.6
Curiously this famous reel first appears in O’Neill as a hornpipe entitled The Shaskeen Clog7 sourced from John McFadden:

Although both Touhey and Coleman play the distinctive B-part 2nd ending variation, itself an elaboration on that of the A-part (resembling the common version today and as can be heard in the Flanagan Brothers’ recording presented here for that matter), it is absent from the two McFadden versions shown above, only to be featured later on in Waifs and Strays (see second quote below).

O’Neill more than once considered the tune worthy of comment:

One of McFadden’s finest traditional tunes was the “Shaskan,” or “Shaskeen Reel,” included among the hornpipes in O’Neill’s Music of Ireland, but properly classed as a reel in the Dance Music of Ireland. It turns out to be one of the rare old Connacht tunes which remained unpublished and but little known except through our belated efforts.
As a Christmas present which was sure to be appreciated, I forwarded in 1907 to Rev. Dr. Henebry, at Waterford, Ireland, a box of Edison phonograph records which Sergeant Early generously permitted me to select from his treasures. Among them was “The Shaskeen Reel,” played by Patrick Touhey. The clergyman’s comment is best expressed in his own words:
“The five by Touhey are the superior limit of Irish pipering. One of his, especially `The Shaskeen Reel,’ is so supreme that I am utterly without words to express my opinion of it. It has the life of a reel and the terrible pathos of a caoine. It represents to me human man climbing empyrean heights and, when he had almost succeded, then tumbling, tumbling down to hell, and expressing his sense of eternal failure on the way. The Homeric ballads and the new Brooklyn Bridge are great, but Patsy Touhey’s rendering of `The Shaskeen Reel’ is a far bigger human achievement. Why, there is no Irish musician alive now at all in his class! If things were as they ought to be, he should be installed as professor of music in a national university in Dublin. And that is what I think of Patsy Touhey and his pipering.”8

O’Neill also offers another setting, this time with variations, from Patrick Stack of Chicago, entitled The Shaskan Reel, with this note:

When John Keegan Casey who died in 1870, author of “Donal Kenny”[9] wrote the opening lines: “Come piper play ‘The Shaskan Reel’ or else ‘The Lasses on the Heather'” those tunes were obviously old, altho’ they had escaped the vigilance of the great collectors Bunting, Petrie, and Joyce. “The Shaskan Reel” or “Shaskeen Reel” as it has been introduced to us by John McFadden, a clever traditional fiddler of the Irish Music Club of Chicago, was printed for the first time in the O’Neill Collections. After being given publicity it won immediate popularity, and soon was a best seller among phonograph records[10]. Like other traditional tunes it has since been subject to various changes and embellishments at the hands of clever musicians as displayed in the florid variant developed by the versatile “Paddy Stack”. To illustrate the wealth of graces, turns, and trills, which adorn the performance of capable Irish pipers and fiddlers, skilful both in execution and improvisation is beyond the scope of exact musical notation. And by the way, Stack is an engineer, not a professional musician.11 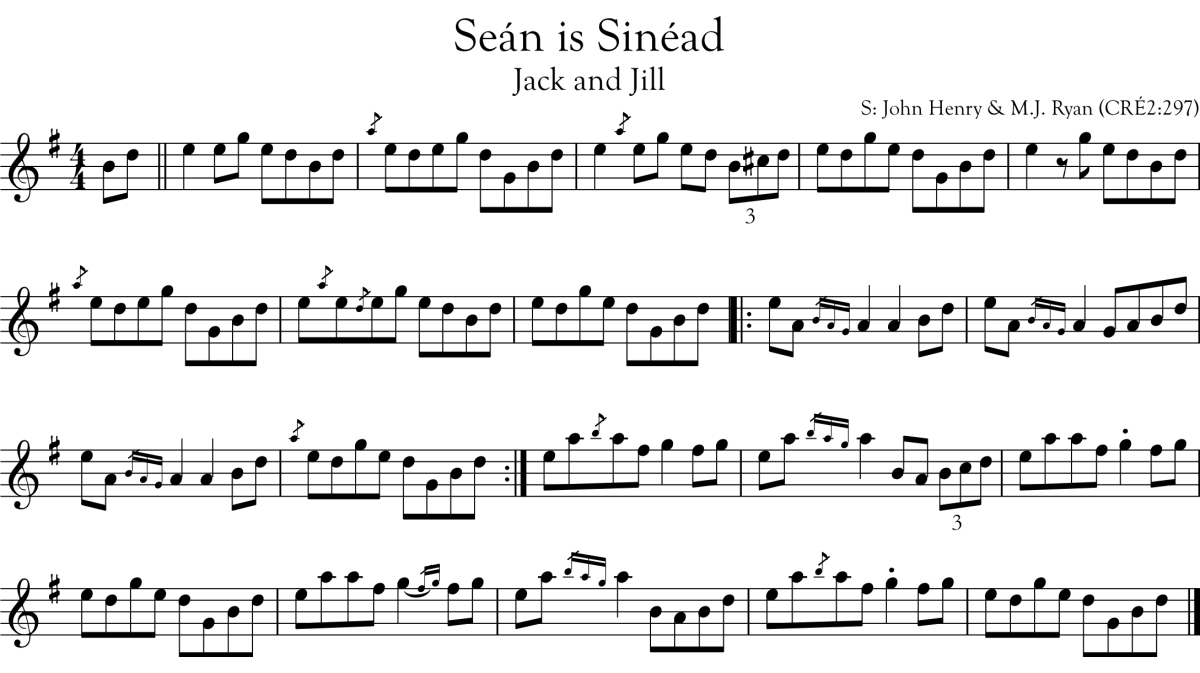