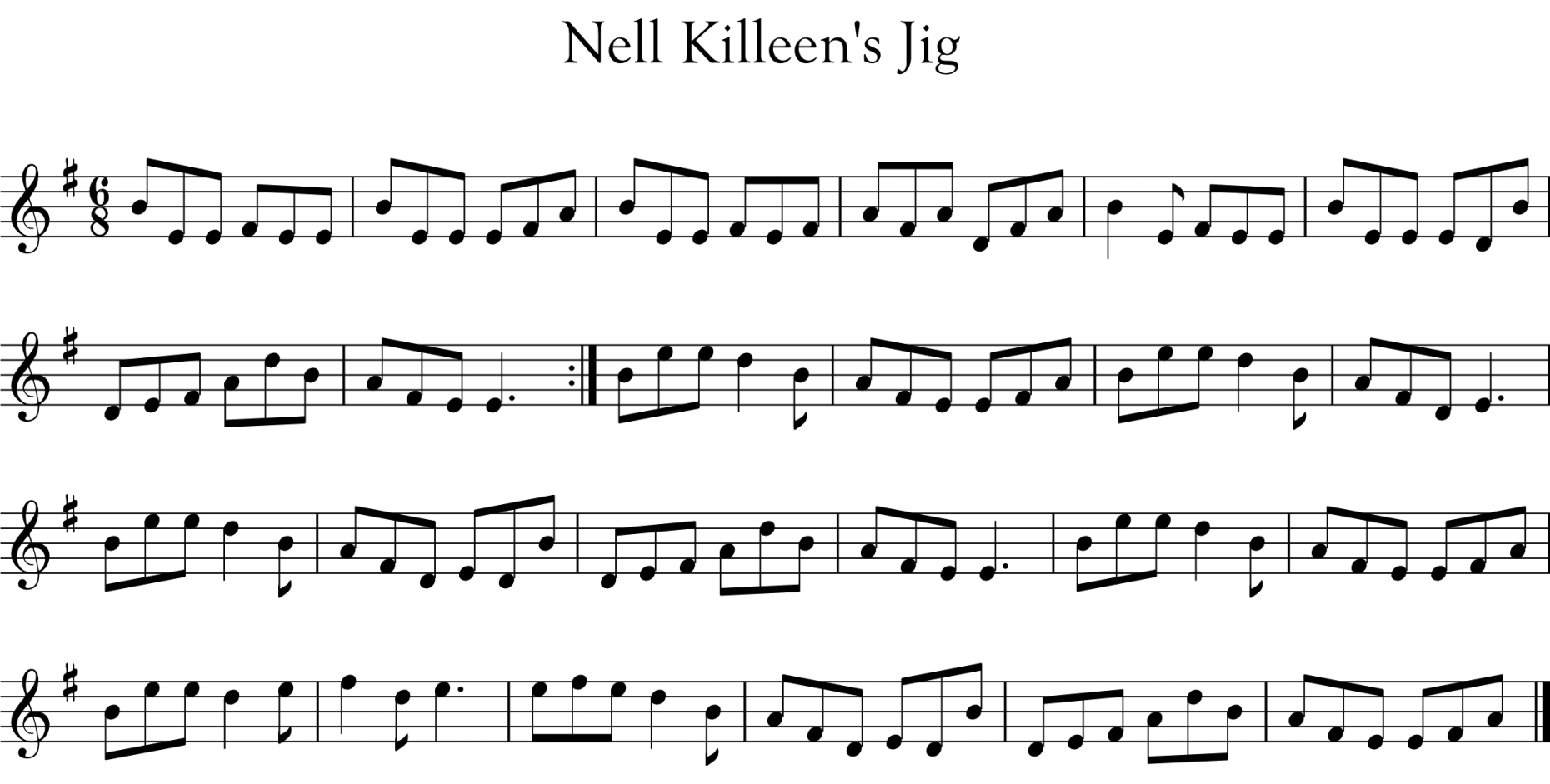 Associated with the blind Piper Caulfield of Liscat, Aghamore (b. circa 1814).1

“Nell Killeen’s Jig is named after a melodeon player from Aghamore, Nelly Halligan-Killeen a descendant of Piper Caulfield. PJ Hernon got it from her at the famous Monday night sessions in Jack Halpin’s pub in Ballyhaunis in the 1950s and he himself recorded it and called it after her. Until then it was associated with this part of Aghamore and Knock though others have started to play it in recent years calling it Scatter The Mud (a tune slightly similar to it).” Joe Byrne (in discussion, Nov. 2017)

In O’Neill’s Music of Ireland, two settings of Scatter the Mud appear in the key of A dorian (MOI:966, MOI:967)2. The first version has a broadly similar A-part to Nell Killeen’s above but a wholly different B-part and is also known as ‘The Eviction’, ‘Maids of Tramore’, ‘The New Glenath’ etc. and appears under such names in older collections.
The 2nd version however resembles both parts of the present tune and indeed the A-part is a near exact match (albeit in the higher key of A dorian) and was sourced by O’Neill from fiddler John McFadden from Carrowmore, Newport.
The second setting also appears in Dance Music of Ireland #187. Paul DeGrae writes:

“The second setting, the only one to appear in DMI, is perhaps an example of McFadden’s renowned skill at variation: the first part is broadly similar to The Eviction, though more noticeable variation creeps in at the end, and the second part is an entirely new creation.”3

He then quotes O’Neill:

“[DMI] No. 187 was obtained from John McFadden; it differs considerably and in my opinion is much superior to a tune of the same name, which is fairly well known. (FON typescript)”4

It is perhaps not too fanciful a speculation that McFadden conflated the A-part of O’Neill’s 1st setting with the whole of the present tune, to arrive at the version of Scatter the Mud that appears in subsequent collections, a transposed and retitled version of the Piper Caulfield tune.